Designed for local backup images for a given VM, the HC3 HyperCore software offers the ability to take multiple point-in-time consistent snapshots of a virtual machine. Each snapshot is a complete image of the VM virtual disks, VM configuration, and even the running operating system and applications when using the Scale Computing Guest Agent Tools (otherwise the OS will be in a crash consistent state, much like pulling a power cord). When the Guest Agent Tools have been installed for in-guest snapshot awareness (part of the Scale Computing Guest Tools Setup for Windows while requiring manual installation on Linux guests), the OS and VSS aware applications on Windows will be instructed to quiesce or “freeze” their data I/O at the exact moment the snapshot is taken. 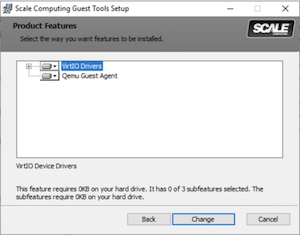 Requested HC3 snapshots occur nearly instantly with essentially no impact on production workloads, even with thousands of snapshots--up to 5,000 for a VM, realistically limited to the available system capacity. With allocate-on-write, no additional storage is used at the time the snapshot is taken. Instead, as blocks are changed, the original data blocks are preserved, and new content is written to freshly allocated space on the system.

The space consumed by a particular snapshot is minimal at the time it is taken as it matches its parent VM block for block. The snapshot begins to consume additional space as the parent VM changes and there are fewer shared references between the snapshot and VM. Blocks will be retained as long as they continue to have a reference by any object on the system.

Snapshots are also the basis of the HC3 system replication feature, allowing snapshots to be stored between a source system and a designated remote HC3 system for a full disaster recovery option. Find more information in the HC3 replication article.

Check out the Scale Computing User Community for more uses and details on HC3 snapshot functionality.